Designer Ekaterina Gracheva has equipped a country house near Moscow in the European spirit.

On the topic: "Art Bureau 1/1": European home in the Moscow region

When designer Ekaterina Gracheva first entered this house, there was bare concrete, puddles on the floor, and water dripped from the ceiling. The hostess met her in rubber boots. Together with her husband, she bought a finished cottage, but its quality, to put it mildly, left much to be desired. And it's not just leakage. The couple looked through a lot of houses - nothing liked it Well, this one, at least, was outwardly neutral, in a modern style, without the kitschy classics inherent in the new sub-Moscow architecture. 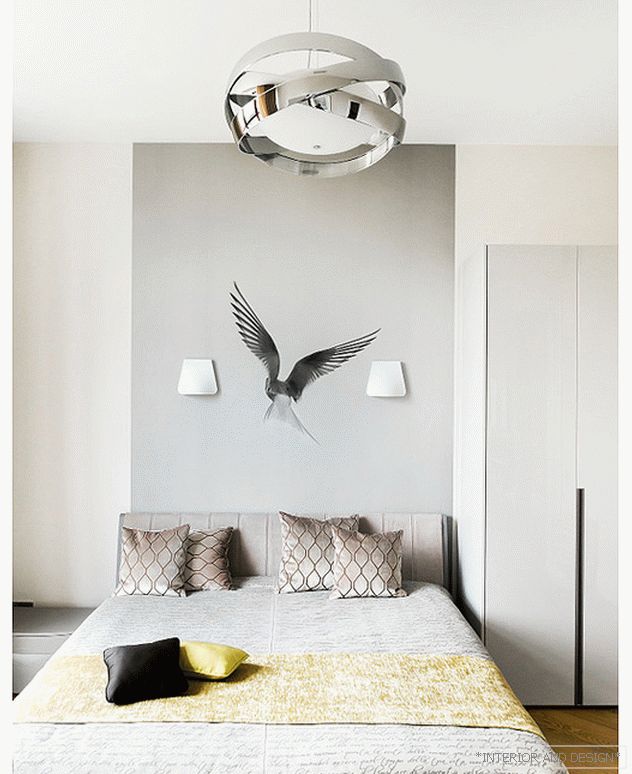 The guest room on the first floor is solved concisely and functionally. All Tomasella furniture. At the head of the wallpaper with a black and white image of a soaring bird.

Attracted and place - cottage village Millennium Park on Novorizhskoe highway, good infrastructure with clubs and restaurants. Customers turned to Ekaterina Gracheva for help: they asked to compensate for the shortcomings of the “shell” with internal harmony, to introduce logic into the interior, to correct architectural flaws. And yet - to create comfort, while maintaining maximum space. 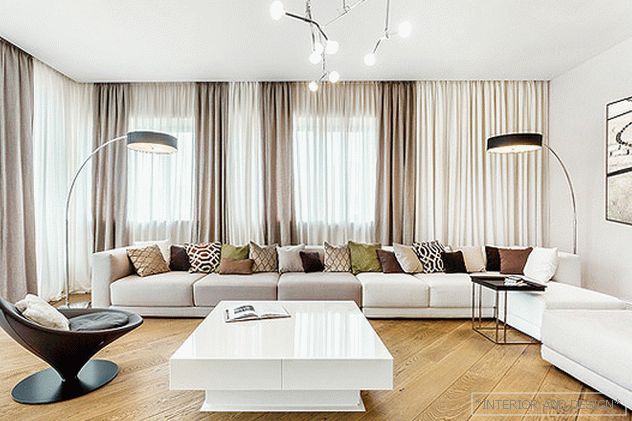 The sofa in the living room, Asnaghi upholstered in different colors. In front of him is a low table Zanette. The desiree armchair, the Estiluz floor lamps, and the Driade chandelier confront the strict geometry of these objects.

“We have seriously worked on the planning,” Ekaterina recalls, “they added a vast terrace, which became a gym with panoramic windows. Changed the roof. Downstairs at the entrance they literally built up a large dressing room, for which they poured a separate foundation. 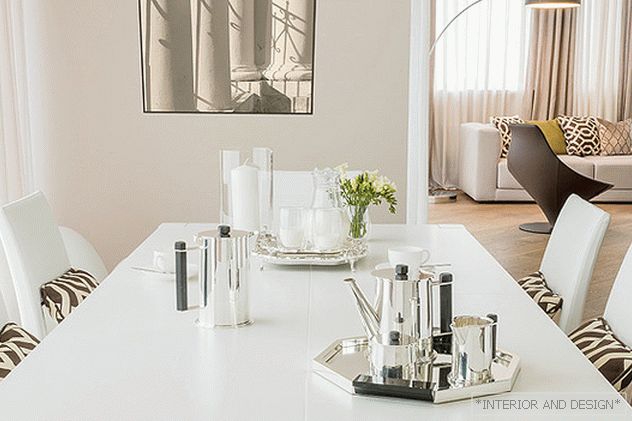 We have provided enough storage rooms and dressing rooms - after all, in order for the interior to remain clean and spacious, we need storage space - roomy, but invisible, not violating the internal architecture. The laundry room, too, turned out to be large, it is hidden near the kitchen behind the sliding doors, so you won’t guess its presence. 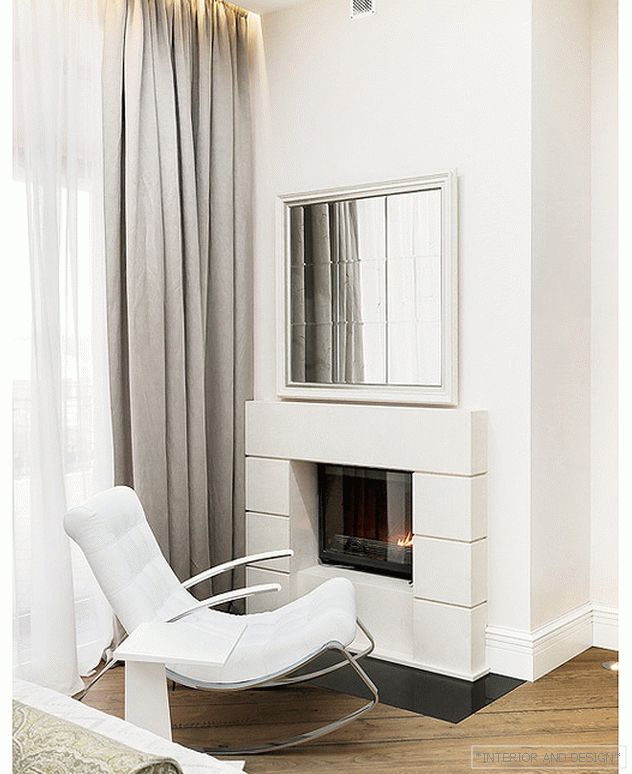 Corner of the bedroom. Rocking Chair and Desiree Table 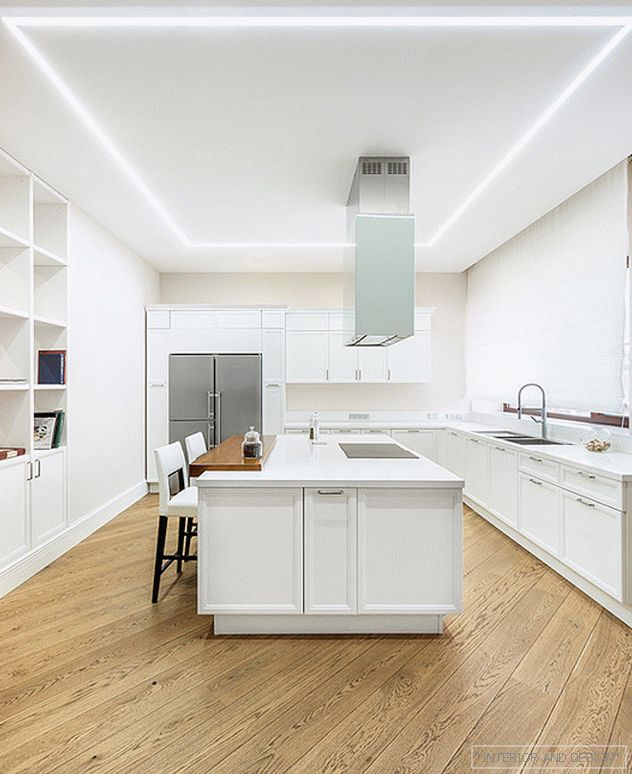 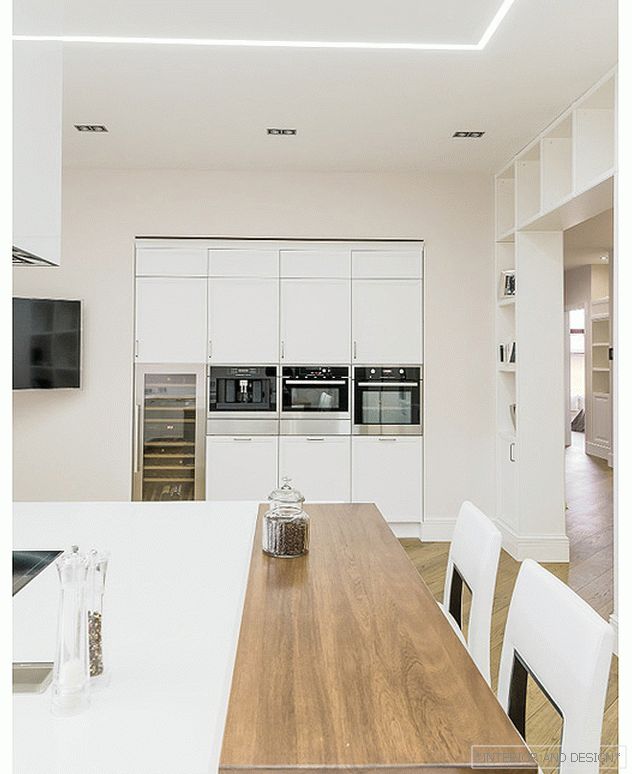 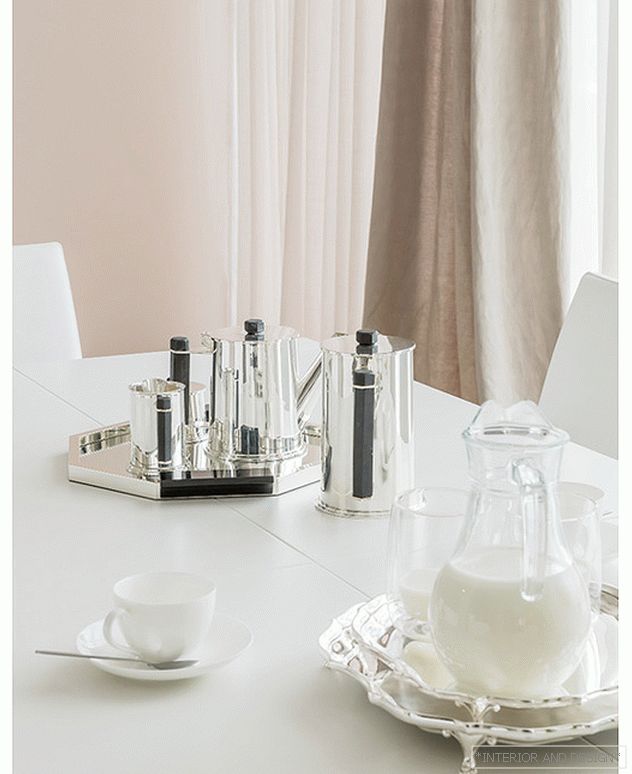 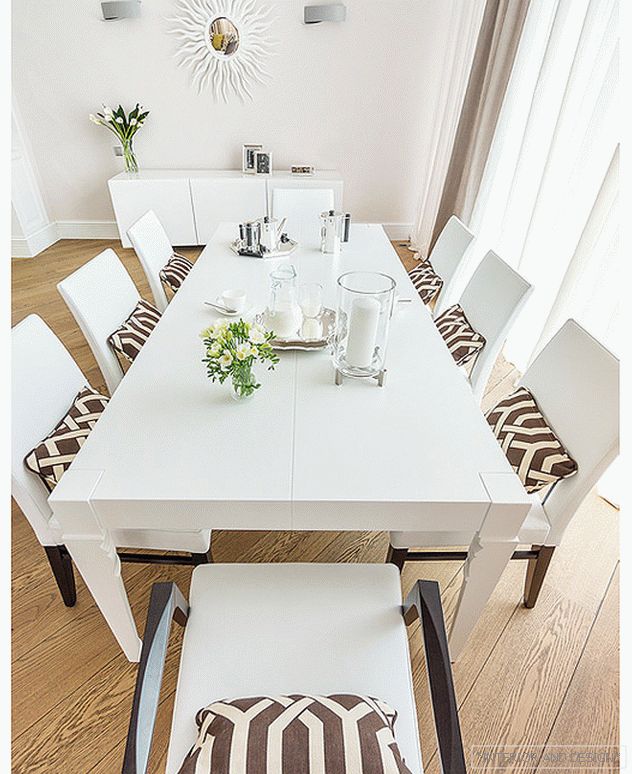 The starting point in the decor was a delicious palette of healthy desserts: creamy, coffee, milky shades. Moreover, coffee with milk is the favorite drink of the hostess. She is also a fan of good red wines - their tones are added in the form of fine accents. The interior is a game. Why not include our customers? ” 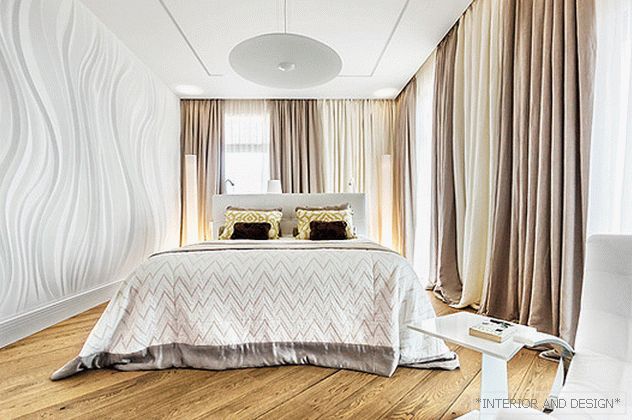 Master bedroom. The wall decor is made of plaster. Chandelier FontanaArte.

The flooring is laid diagonally. “The house had a lot of vast spaces of complex shapes,” explains the reason for the designer. - And for life the right ones, or at least good ones, are good. We couldn’t put parquet lengthways or across them, because at that time the already elongated parts of the house were even longer. Since the floor occupies a large surface, drawing attention to itself, it must be beautiful. Therefore, we chose the Boen Alamo oak plank. It has a rich texture with specially crushed (so as not to fall out) dark knots. ” 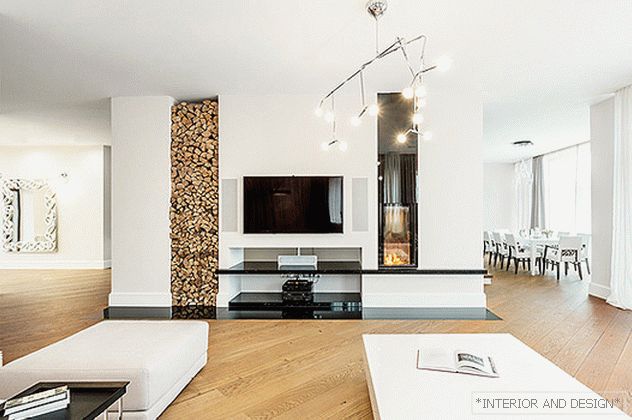 A partition with a fireplace, a TV set and a logger was built at this very place in order to disguise the bearing support. The partition zones the open space of the first floor and organizes the TV-zone - on the contrary there is a large sofa.

“In a modern, spacious and uncluttered house there should be appropriate furniture. Therefore, we are dominated by objects of simple cubic forms. At the same time, when everything is exceptionally rectilinear, is also bad, in small doses more complicated things are also needed, which are interesting to consider. Such were, for example, an asymmetrical chandelier in the living room, a large mirror in the hall. And the mirror not only decorates a wall, but also masks the electric hatch. It is seated on a frame with hinges and opens like a door. ” 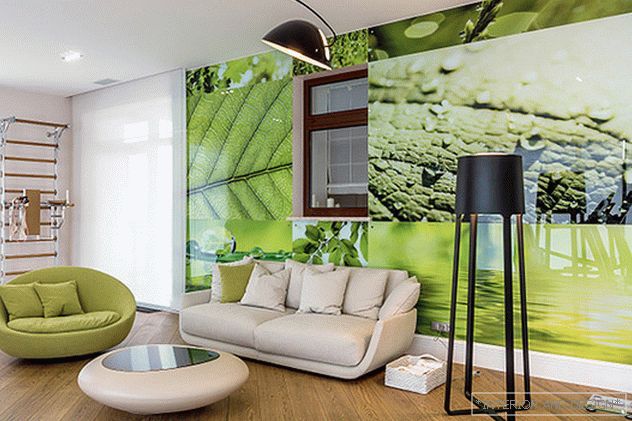 Gym in the attached terrace, treated as a living space. On the wall a print in invigorating shades. “Such brightness is present only in this room. The whole house cannot be like this. In addition, saturated colors quickly bored. " 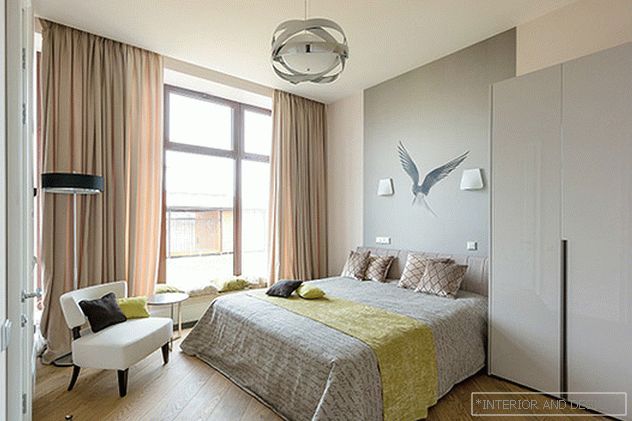 The guest room on the first floor is solved concisely and functionally. All Tomasella furniture. At the head of the wallpaper with a black and white image of a soaring bird. 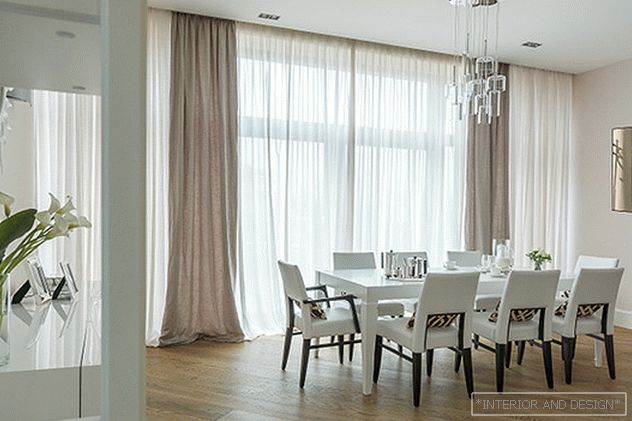 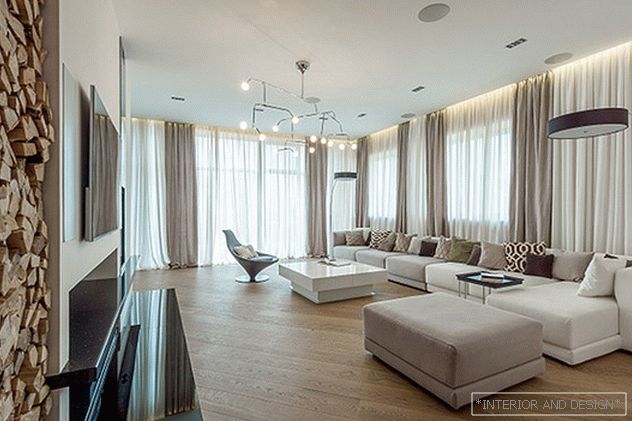 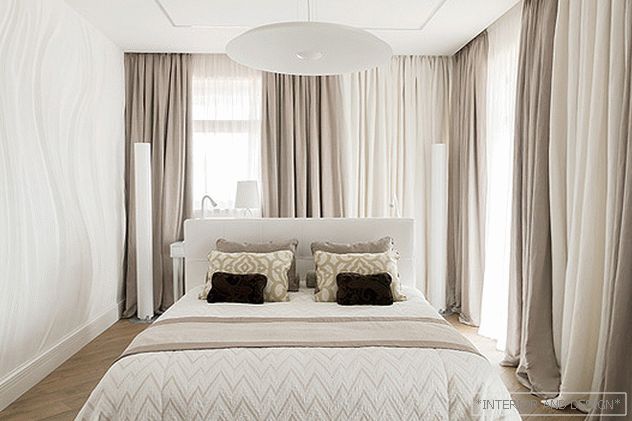 Bed brand Twils outside the box is located in the middle. A linen chest Alf is installed behind the headboard. “At first we wanted to put table lamps, but were afraid that they would be too high, it would be inconvenient to read,” explains the designer. 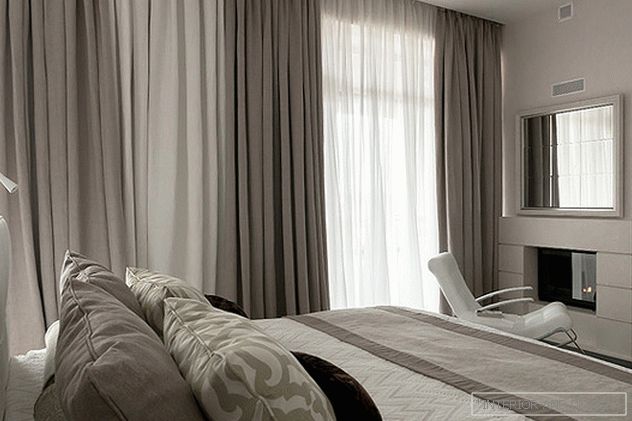 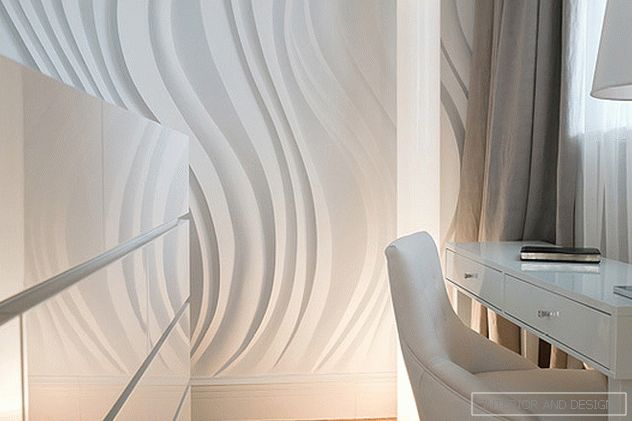 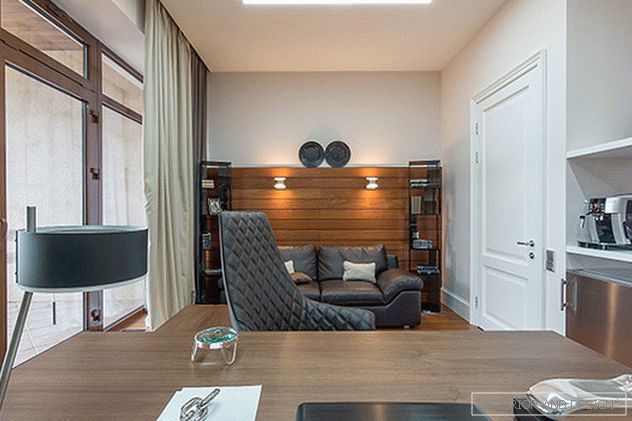 According to the first profession, Catherine is a psychologist. However, in the 1990s, she changed her occupation - went into interior design. “At that time, the words“ designer ”and“ decorator ”really no one knew,” she recalls. After her studies, Catherine trained in London, Florence and Venice, lived and worked in Berlin, so she knows European taste well. 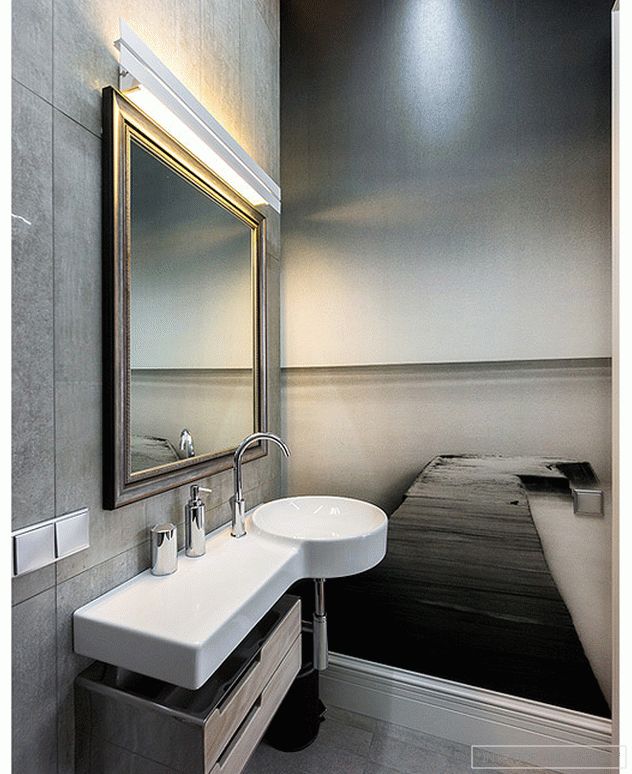 “I do not accept the pathos, to a simple, but rational decisions. And the ecological theme is close to me: I love wood and stone, I try to walk away from all non-natural. Even in places that are out of sight, I use natural material. ” 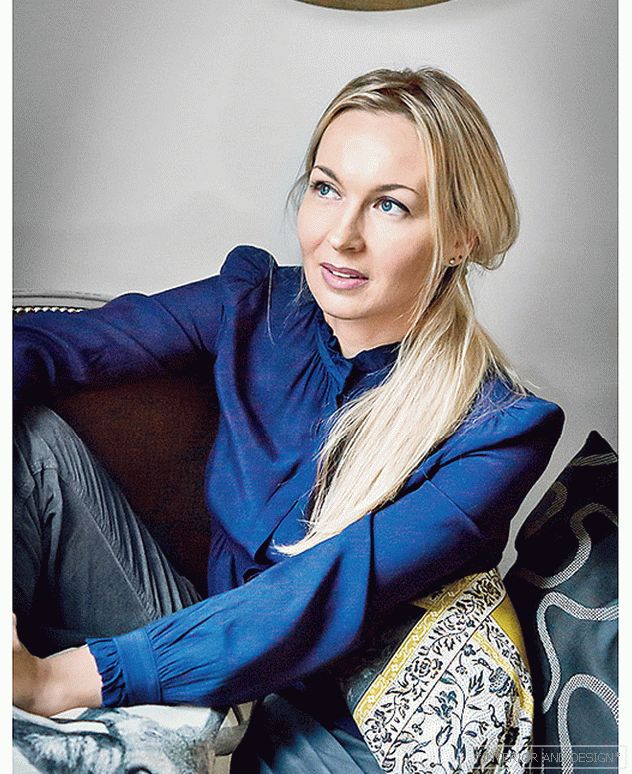 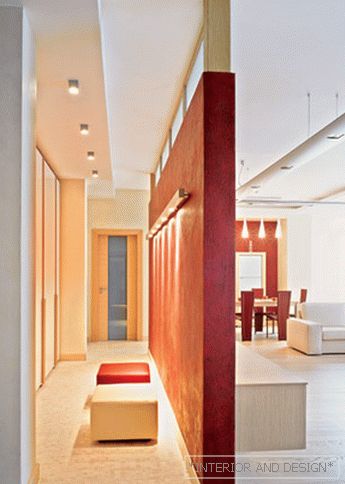 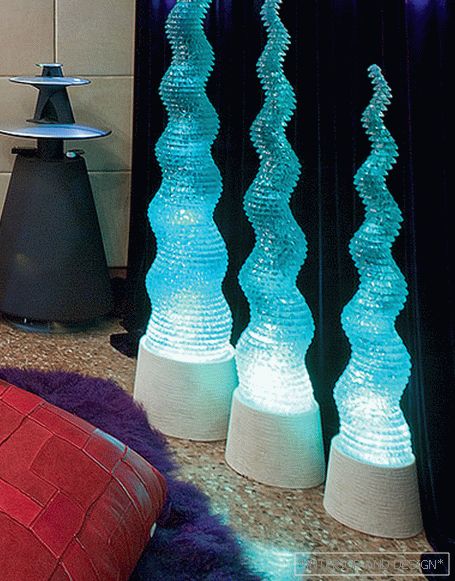 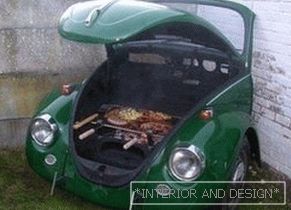 Metal braziers do it yourself