Peter Marino (Peter Marino, born 1949) is called a specialist in the presentation of the suite. Or an architect suite - for short. Among the top fashion brands it is considered good to order him flagship boutiques. Fendi, Armani, Valentino, Chanel, Luis Vuitton, Bvlgari, Donna Karan, Dior, Ermenegildo Zegna are Marino's regular customers for whom he works all over the world. Geography: Paris, London, New York, Beverly Hills, Hong Kong, Shanghai, Singapore, Tokyo; In the spring of 2016, the monobrand Bvlgari opened in Moscow. Fashion brands trust Marino and keep him faithful: a total of 12 stores in different parts of the globe are sold for Chanel only.

As Peter Marino himself admits, his business receives up to 40 percent of revenues from the fashion industry. However, activity is not limited to this sphere. Among the memorable projects in his portfolio, Marino names the interiors of luxury condos in the Upper East Side and West Chelsea in New York, the club-casino and spa in Santa Barbara, the yacht club in Sardinia, the presidential suite at the Four Seasons Hotel in New York , Peninsula Hotel in London, Cheval Blanc Hotel in Paris ... And the total number of successful luxury projects is in the hundreds. 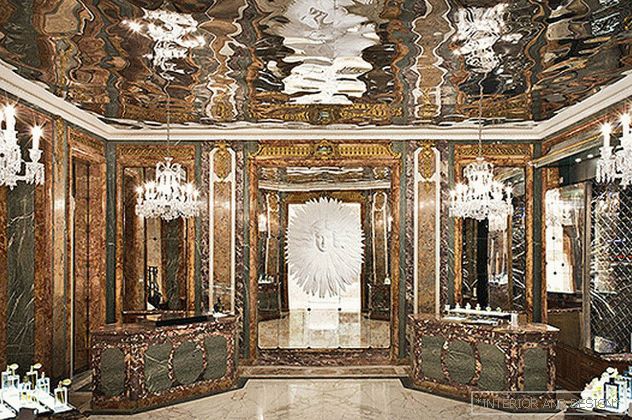 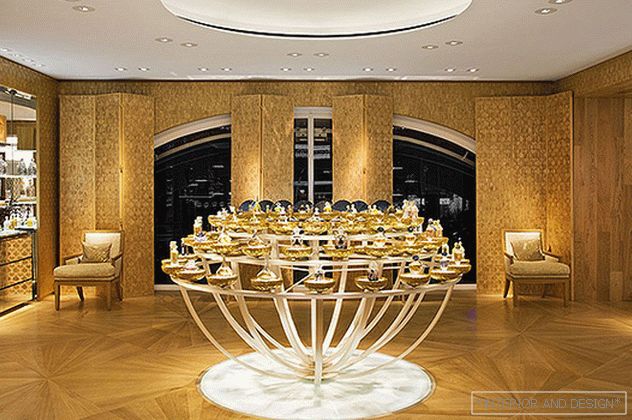 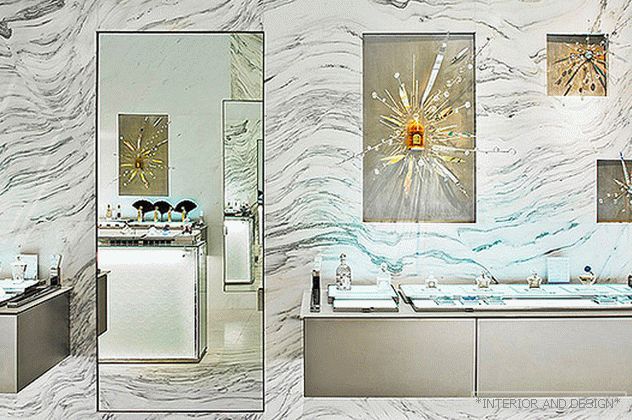 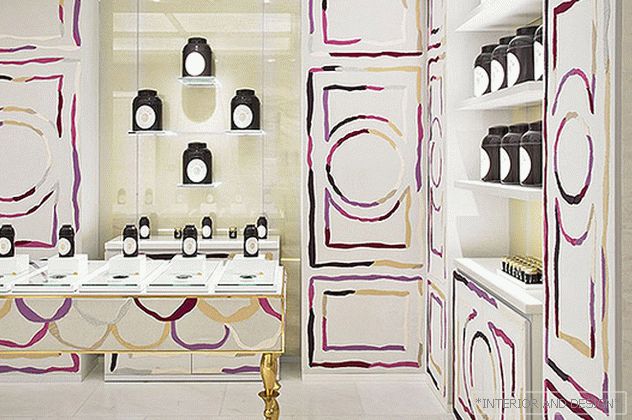 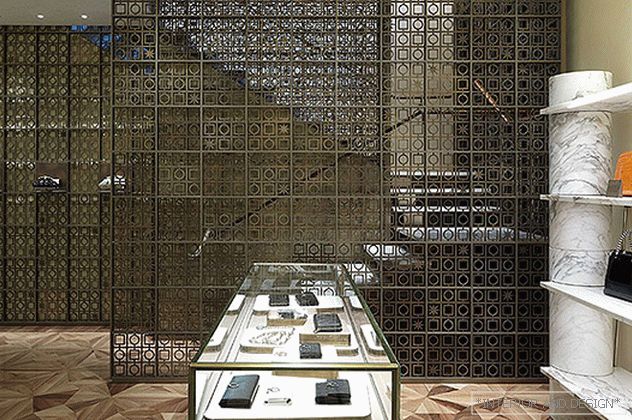 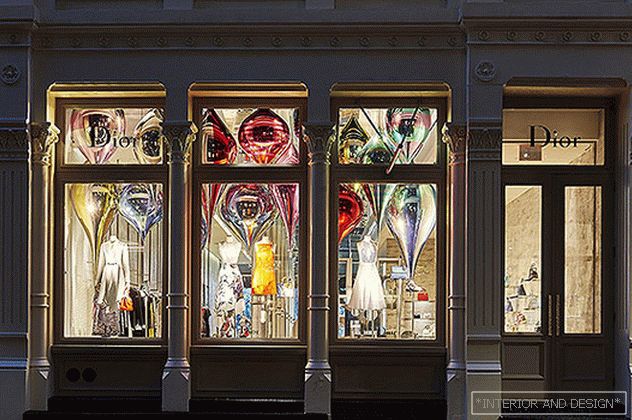 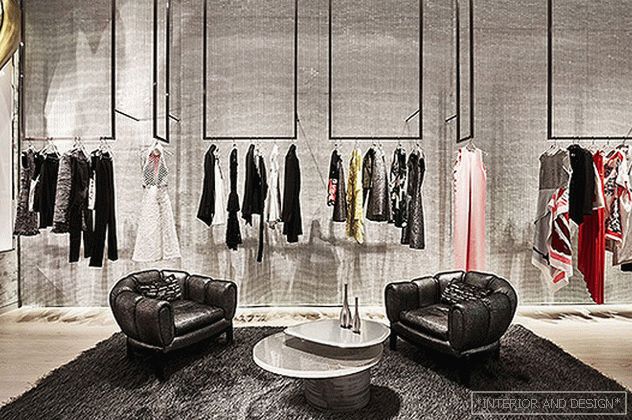 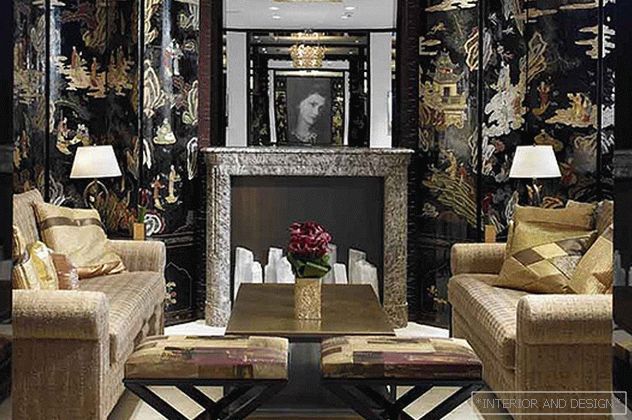 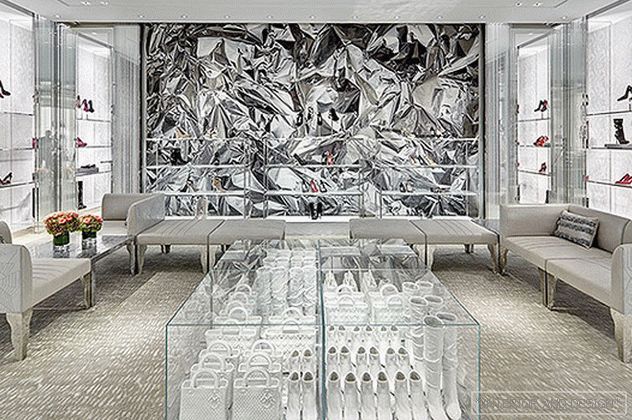 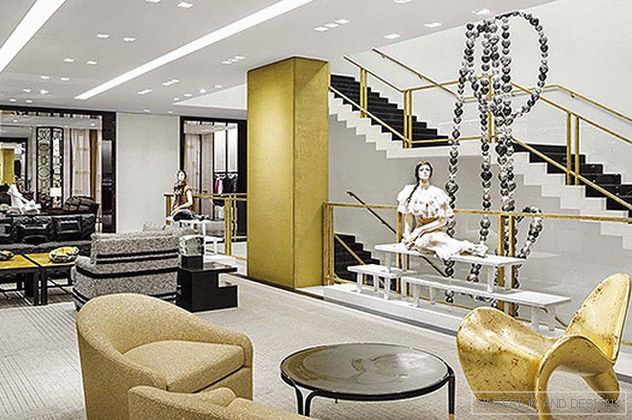 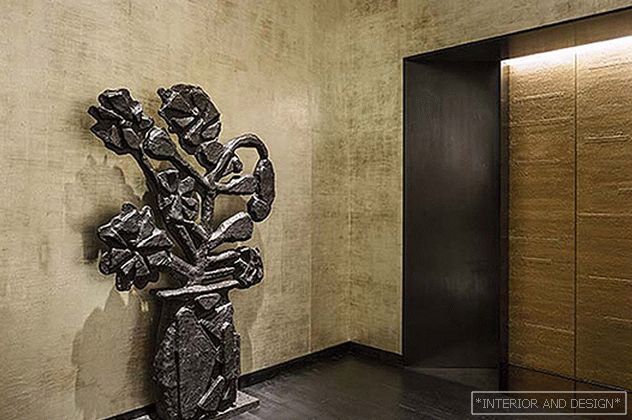 “To include a work of art in the project is to improve the architecture somewhat. I never miss such a chance. ”

Peter Marino is 68 years old, but he looks surprisingly youthful. Always dressed in tight black leather, showing tattoos and biceps. In general, his image shoots the dear audience, and she is glad. Like the fashion genius Karl Lagerfeld, the genius of timeless luxury has not changed his image for years. He is no stranger to what assistants call him a tyrant, and his family (Peter Marino is married to costume designer Jane Trepnell, they have a 23-year-old daughter) sometimes have to defend the architect’s reputation from accusations of sex harassment in court. subordinate or young attractive boys.

Flagship boutique Guerlain on the Champs Elysees in Paris. 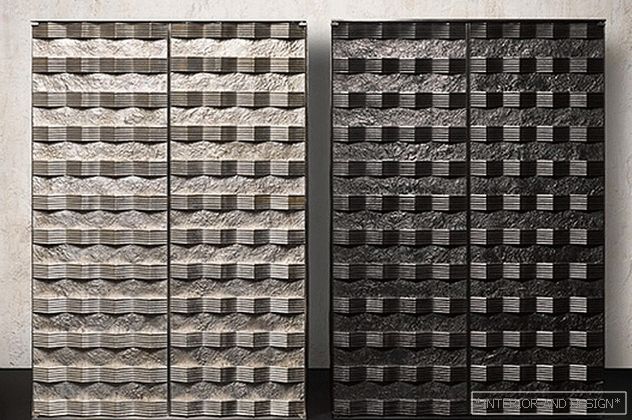 Private clients include Greek shipowners, Italian industrialists, and American bankers. Well, the first customer was Andy Warhol. Thirty-eight years ago, he commissioned Peter Marino to redesign his studio The Factory. Since then, Marino has included contemporary art in absolutely all projects - “as part of an architectural concept.” 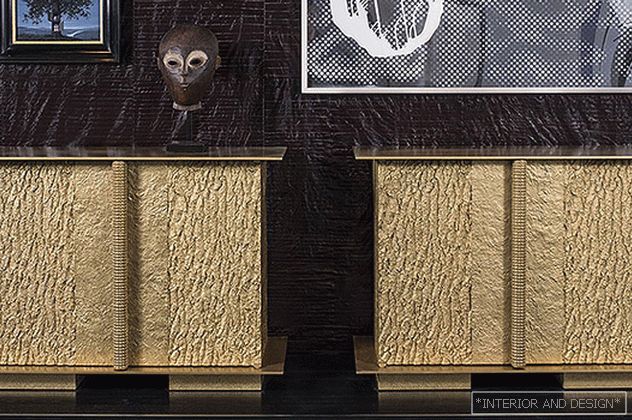 Perhaps no American author understands art so subtly, does not assign him such a role in the interior. Marino is convinced that modern art not only enhances the status of the project, but helps to make it fashionable, bring in the necessary irony, knock off arrogance from respectable classics - if the interior is settled in a classical manner. “To include a work of art in the project is to improve the architecture somewhat. I never miss such a chance. ” He says that he feels like an artist. With the only difference that creates three-dimensional objects. 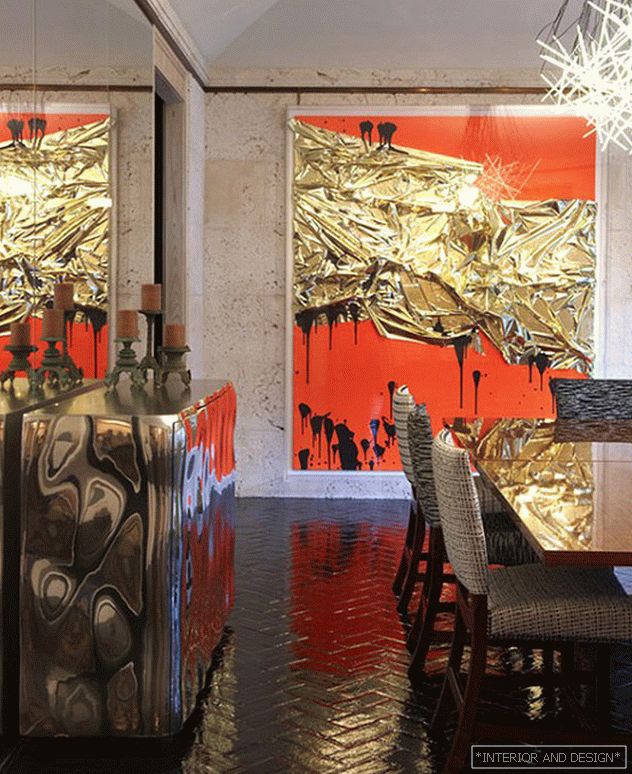 Residence at Palm Beach. P. Marino moved away from the clichés of the "tropical villa" and made art the main character of the interior. The work of A. Reil is reflected in the mirror, in the console F. Corbo, the table of P. Marino and the glossy surface of the floor. Light, diz. A. Levy.

Marino is respected and invited by museums and private collectors - he knows art so well. The architect is known as a patron of arts, supporting young artists, and even sponsor of the artbiennale in Berlin. And also as a passionate collector. His collection contains works by Anselm Kiefer, Cy Twombly, Richard Prince, magnificent Renaissance bronze and French porcelain from the 16th – 18th centuries.

His friends include not only Marc Jacobs or the Arno family, but also first-hand gallery owners such as Larry Gagosian, Jay Jopling and Emmanuel Perrotin. The authority of Marino is so high that he is invited to design museum exhibitions. One of the most interesting projects in the portfolio is the set design of the Augustus the Strong porcelain exhibition, arranged in one of the Zwinger galleries in Dresden. 2010 was marked for Marino-set designer by Claude and Francois-Xavier Lalanne retrospective at the Paris Museum of Decorative and Applied Arts. 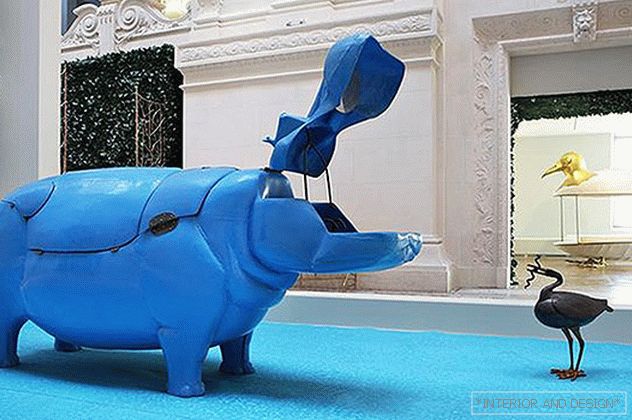 Peter Marino staged a retrospective exhibition for Claude and François-Xavier Lalande at the Paris Museum of Decorative and Applied Arts. 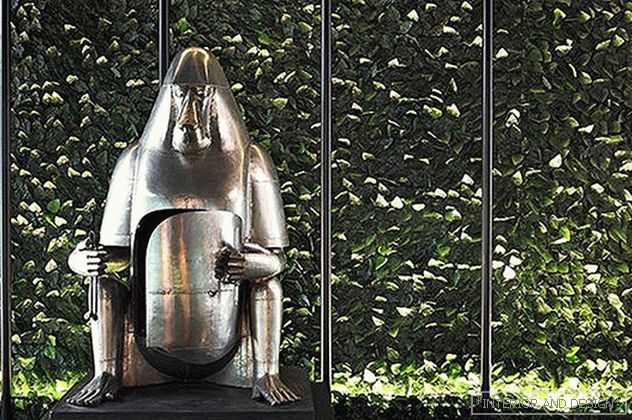 Peter Marino staged a retrospective exhibition for Claude and Francois-Xavier Lalande at the Paris Museum of Applied Arts. 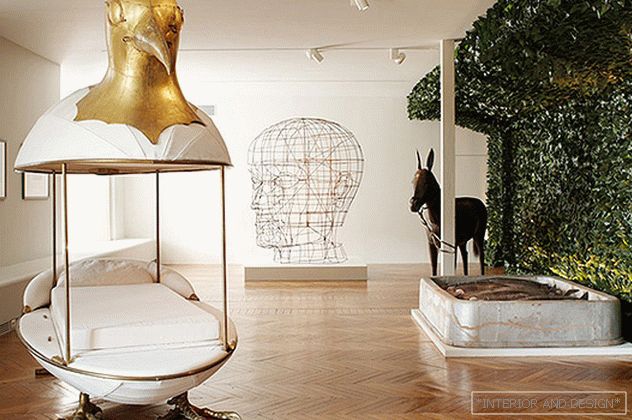 Peter Marino staged a retrospective exhibition for Claude and Francois-Xavier Lalande at the Paris Museum of Applied Arts.

In 2014, the Bass Museum of Art, Miami, hosted the One Way exhibition: Peter Marino. It included both works from the collection of the architect, and his own works in the field of design. In January 2016, Marino curated Robert Mapplthorpe's exhibition entitled XYZ, held at the Thaddaeus Ropac Gallery. In 2016 year published a book Peter Marino: Art Architecture. It is noteworthy that an autograph session with the author was organized in his gallery by none other than Larry Gagosyan. 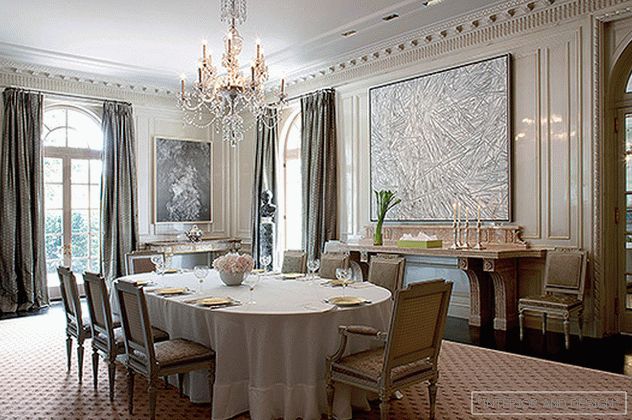 Preston Manor in Dallas is the most significant monument of Texas in the first half of the 20th century. P. Marino. In the front dining room the mood is created by the photo of A. Fass and the graphic artist J. Lethbridge.

“Lux is space and light plus materials”

A special place in the career of the architect Marino is occupied by private residences; Currently, there are several objects in operation at significant addresses: London, Paris, New York, Beirut, Gstaad, Saint-Tropez, Monaco. An American architect loves scale and does an excellent job with large volumes. It deals mainly with palaces, and if it agrees to an apartment, then from 24 rooms and on Fifth Avenue. It is taken for the reconstruction of historical monuments.

A brilliant job - the renovation of the Preston estate in Dallas: the building was created in 1939 by architect Maurice Fatio for the spouses Crespi, the Italians who are rich in cotton merchants, and today is recognized as the most significant Texas monument of the first half of the 20th century. Marino compares it with an estate somewhere in Lombardy: except that the scale is different, “American”. “I wanted to bring patrician carelessness, even carelessness - this can be seen in the residences of Italian Anglomania, such as Agnelli, or English Italophiles, such as the Rothschilds. At one time, I worked for those and for others. ” 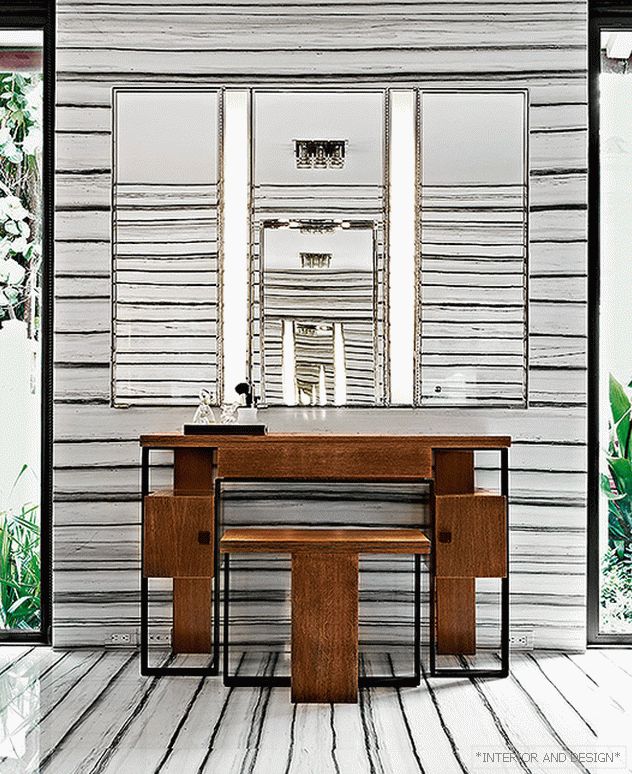 Residence at Palm Beach. Striped bathroom finish on closer examination turns out to be magnificent marble. The lines of the stone echo the frame of the dressing table of the 30s and the black window frames.

“Lux is space and light plus materials,” Peter Marino likes to repeat. American signature style - expensive luxury textures: gold, bronze and brass, precious wood, magnificent marble (Marino is a regular customer in Carrara, where the best grades are mined). It fills projects with not just valuable, but unique finishes. It covers the walls with silver, adds pearls and crystal. "Glitter brings luxury and sensuality, if only it is not intrusive and vulgar." Marino does not repeat, varies finishes depending on the location, tastes of the client and their own view of the object. It can sew up an interior in an Indonesian wood the color of dark chocolate, creating a mixture of a Buddhist temple and a European palace, or it may prefer a simple light oak, but it will be so elaborated that it will become luxurious. 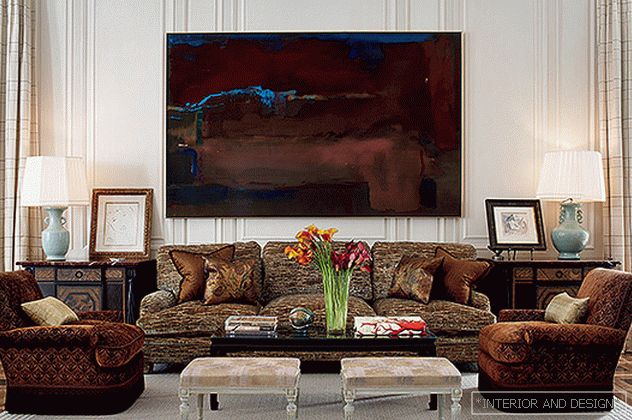 The architect skillfully knows how to fuse different eras and cultures into an ensemble. Fearlessly decorates the house with 250-year-old Murano chandeliers and Venetian mirrors reflecting Indonesian sculptures and canvases of German expressionists. Marino assures that the ability to mix western and eastern, he spied the Venetians. "They interpreted Turkey and Southeast Asia in their own way." In general, Marino calls his style a timeless luxury - timeless luxury. He deliberately avoids fashion trends, considering them a dangerous trap, while emphasizing that his works are modern. "Modernity - the author's attitude to what he does." 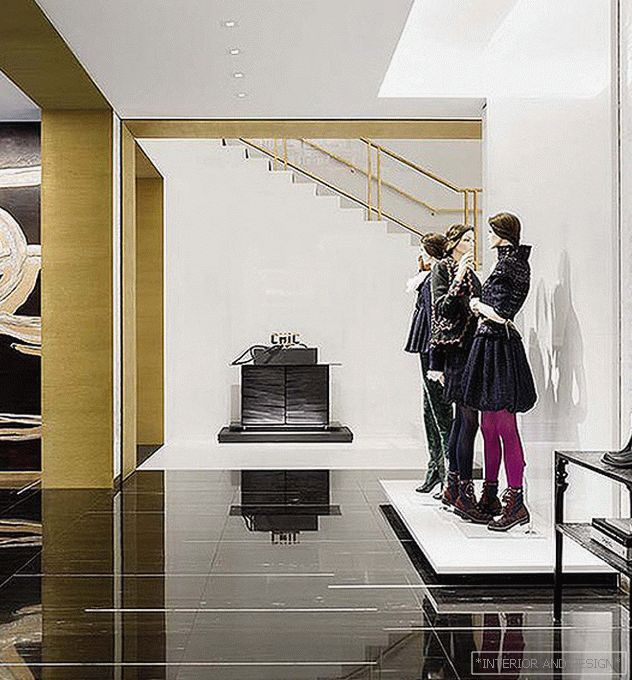 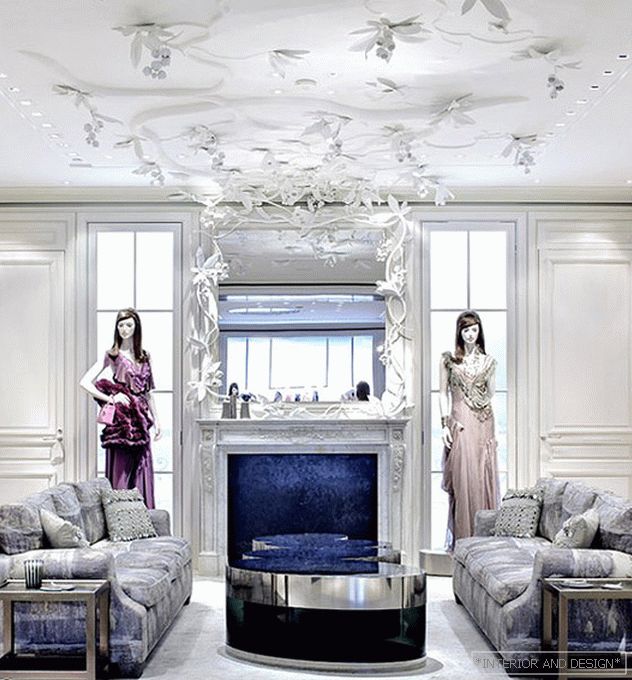 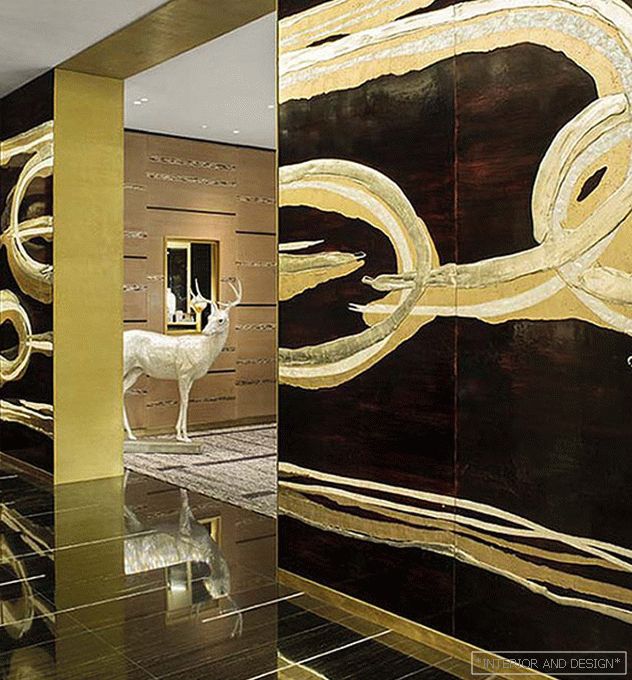 Marino does not use serial furniture. Only antiques and items to order. Why? “What is being replicated cannot be considered a genuine luxury - anyone can buy the same. In addition, it is easy to determine from a factory item what kind of brand it is and how much money has been spent. As if a label with a price tag hung on the sofa. ” The authentic suite is unique. The principle of "only here and nowhere else" makes him pull at antique dealers, outbid the most extravagant works. If there is no suitable masterpiece, then Peter Marino draws and produces the thing himself. In a single copy. An architect not only designs furniture for objects, he often manages to persuade eminent artists to make something to order specifically for a project. 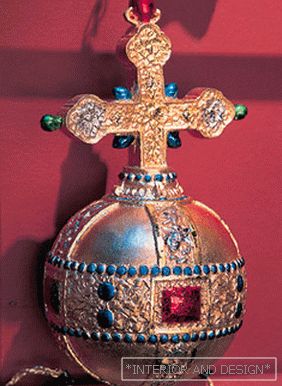 Property of the republic 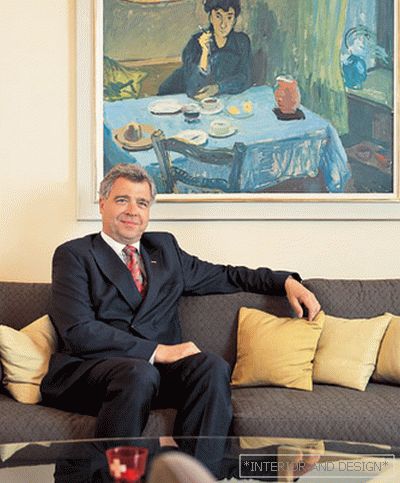 There will be a garden city ... 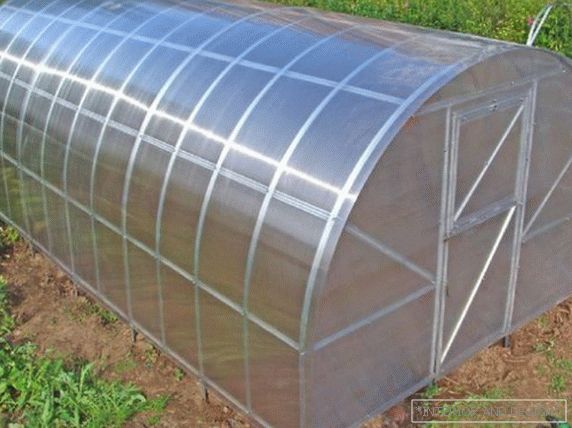 Greenhouse do it yourself

How to choose a garden hand sprayer

Fashion trend: surrealism in the interior