Architect Tatyana Smirnova brilliantly succeeds in modern interiors. But this project became for her a completely new experience and forced her to step into unfamiliar territory. 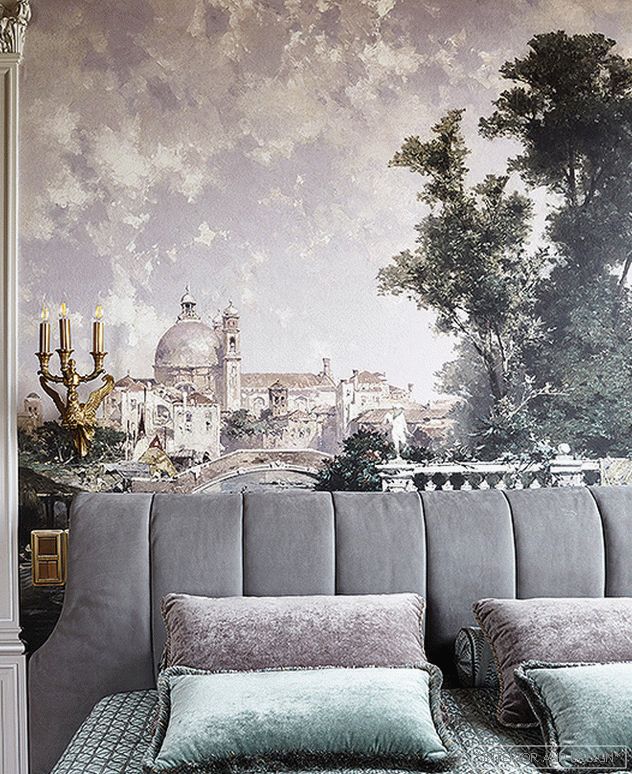 Bedroom. Baxter bed. The frescoes were made by Marat Ka. “Due to the fact that the apartment was a playhouse, theatrical, I took it upon myself to integrate these views into the interior,” says Tatyana Smirnova.

The story began with the fact that she called a certain lady. And she said that she and her husband were looking for an architect, and Tatiana was recommended to them by her friends. Moreover, they don’t like any of the works presented on the website of her bureau. “I logically asked: why are you calling me then? And I heard in response: “We are not very good at architects, and they don’t enter this world, but since they recommended you anyway, they decided to call you” Then it became even more interesting: it turned out that customers want classics. ” As Tatyana recalls, the voice in the phone was so sweet and polite that it was impossible to refuse him. "We agreed to meet at the facility." 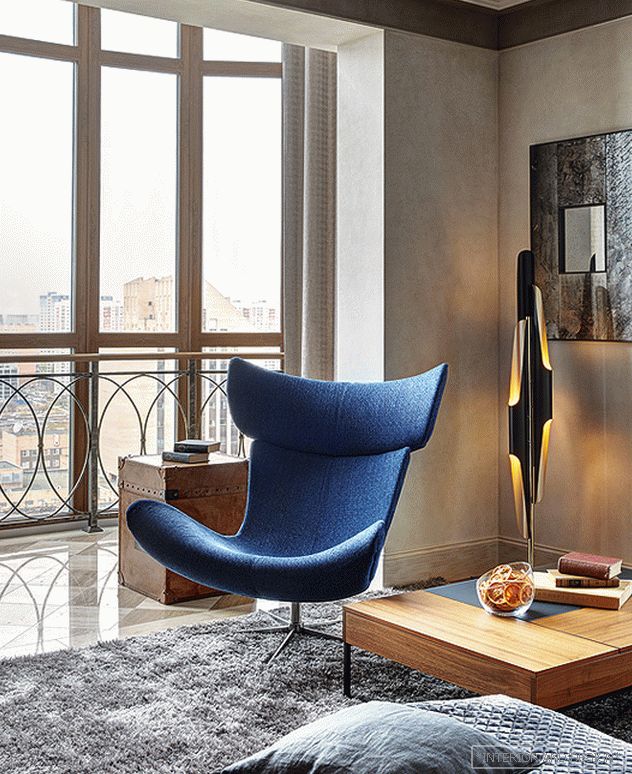 The room of the eldest son is furnished in a modern manner. Furniture BoConcept. Window fences, stucco cornice under the ceiling (albeit of a very simple form), as well as a mirror in a patinated frame, connect the interior with the rest of the rooms.

“At the facility, another shock awaited me - the apartment on one of the upper floors of the new building turned out to be extremely difficult: asymmetrical, elongated, with turns and entrances at the end. No effort was possible to restructure it into something classic - it was anti-classic! What bribed, so these are enchanting views of Moscow. Although for this trump card still had to fight: panoramic windows were located outside, in the loggias, which had to be attached to the rooms. The process of reconciliation and accession took almost half a year. Clients were no longer glad to have contacted me. But I firmly went to the goal. 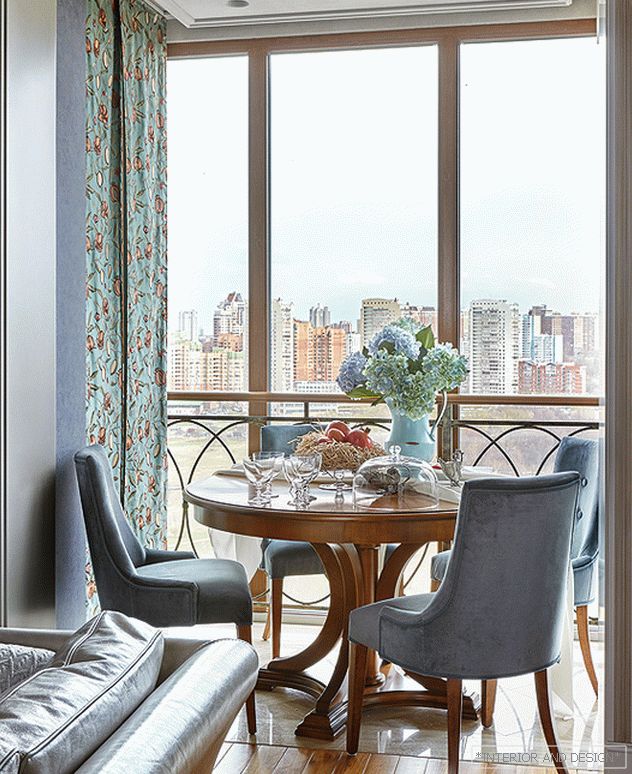 Dizzying panoramas of Moscow were the main asset of this apartment. In the attached balcony is a dining room. Table Philipp Selva, Eichholtz chairs.

As a result, we received a completely different space, a different light, a different emotional background. And I finally understood what we were going to do — an apartment that is all eager for the light. And since the clients asked for a color interior (perhaps their southern roots affected), the light combined with the color brought me to the Italian theme. 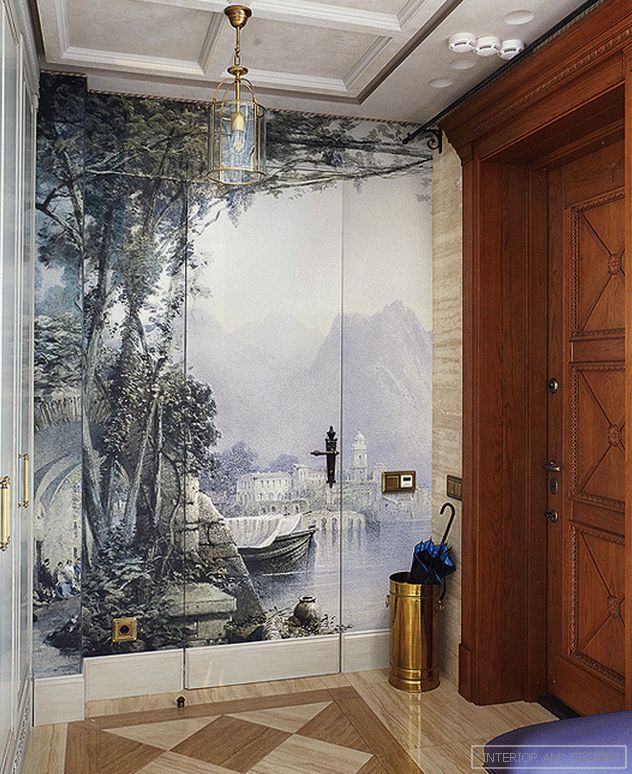 The fresco on the wall extends the hallway space. A secret door leads to the guest bathroom.

Due to the fact that I could not make a full-fledged classic apartment, I could not circumvent the structure and plasticity of a new house, I decided to create a “fantasy on the subject.” She invented a story: as if the new life had entered the old, abandoned house of the owners, and, aspiring to the light, “sprouted” through the old environment. Therefore, new and old parts are so strangely mixed here. ” 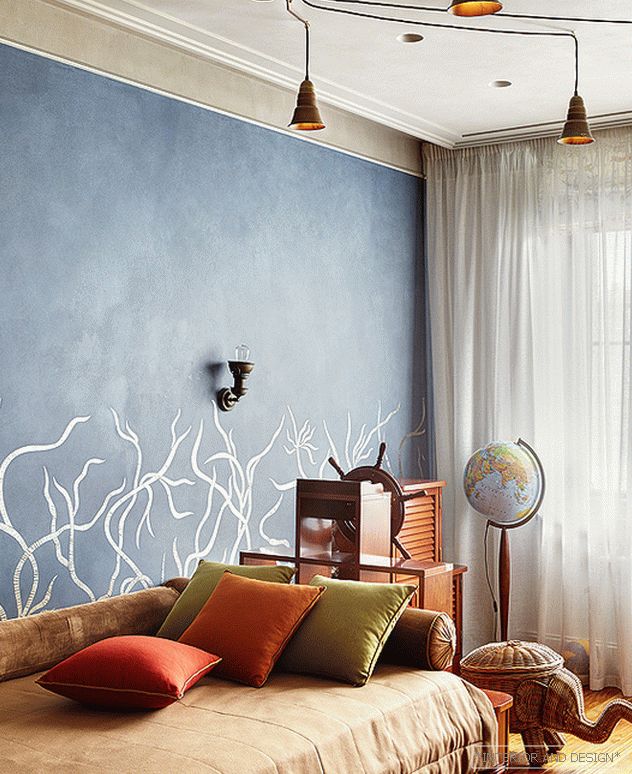 The room of the youngest son is furnished with Caroti furniture. The interior maintains the palette and style of the whole apartment.

Furniture and decor are chosen “between times”: antique dressers and bureau, respectable armchairs, a bed in the spirit of Art Deco - it is made by the Italian factory Baxter. In the room of the son, the authors allowed to be almost completely modernists, but even there there are classic details - a mirror with a patina, window fences. 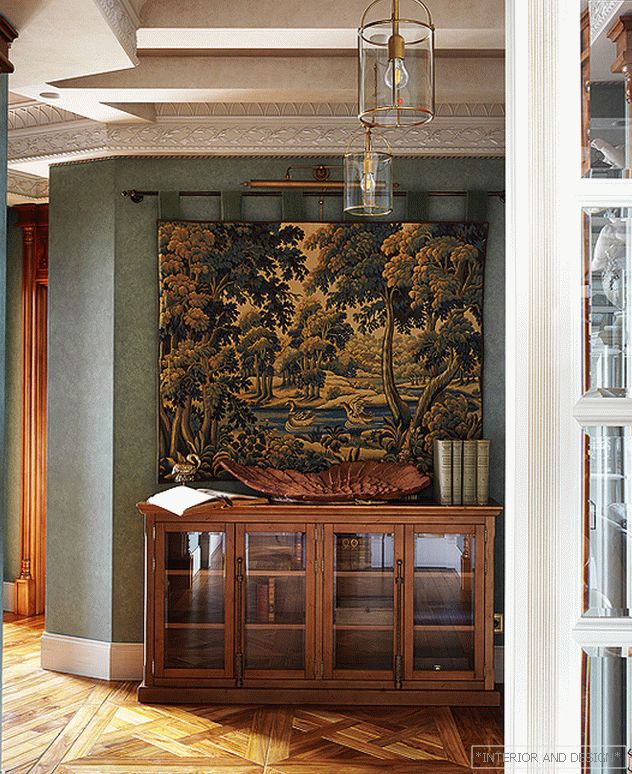 Internal halls help to visually straighten the asymmetrical configuration of the apartment. On the wall is a tapestry, custom-made in France.

The molding cornice (from real gypsum, no polyurethane) is fantasy, it has no historical basis. But the ceiling beams - an exact replica of the beams of the Venetian Palazzo. 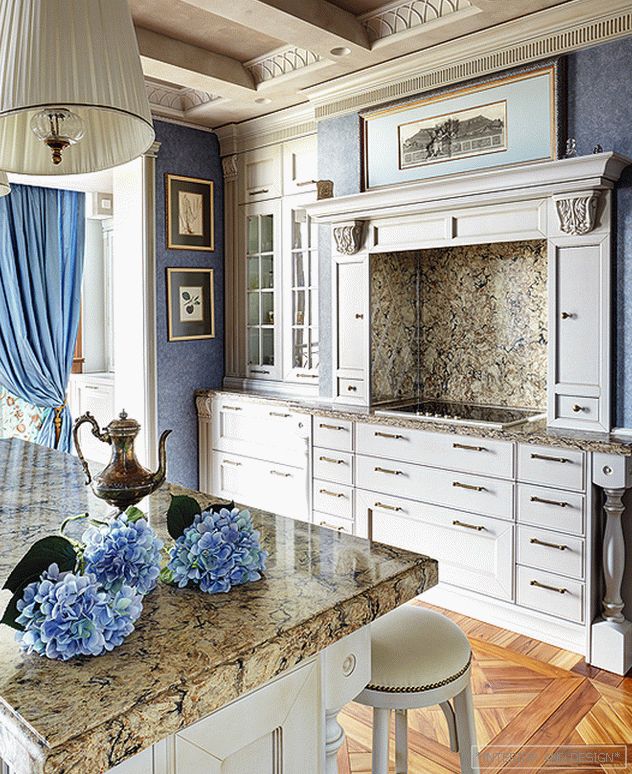 The kitchen for the project was chosen by Italian, Aster Cucine factories. Its decor was taken as the basis for the manufacture of joinery products for the project: portals, doors, etc. Household appliances Smeg.

The kitchen chosen Italian, similar to the kitchen in the old houses. Focusing on its decor, we made non-standard joinery elements: doors, panels, etc., for which we found craftsmen in Obninsk. “At first I was full of skepticism, but in the end it’s impossible to distinguish where the Italian hands end and ours begin,” says Tatyana Smirnova. 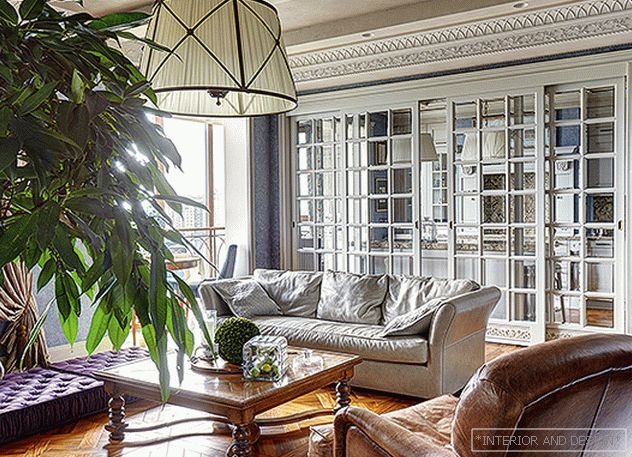 Living room. Sofa and chair Baxter. The partition separating the kitchen is made by Russian masters. Decorative ceiling beams not only do not reduce the height of the room, but even visually increase it.

One of the conditions of customers was the absence of carpets in the interior. For architects, this created additional difficulties: in an elongated asymmetric apartment, carpets could have become necessary reference points in the classics, composite centers. The situation was saved by parquet, painted so that it looks like a carpet. Powerful accent, he keeps the interior and composition, and color. His warm amber tone is complimentary to all the colors of the apartment and also creates the feeling that she is constantly bathed in sunshine.

For the walls of the bedroom selected a complex tone. Artistic painting: Marat Ka. Plaster molding of plaster - a fantasy on the theme of classic decor, but the ceiling beams - an exact replica of beams from the Venetian palazzo. Baxter bed and chair.

Coloristically sophisticated interior is built on almost contrasting colors. It is noteworthy that the customer asked for a red bedroom. “I didn’t see any problems in this, although I warned that red is an alarming color and does not favor relaxation. Has defined, in what shades it is better to lead him. And then the real horror began. We did dozens, hundreds of colors - not a single tone was suitable, not consistent with the interior. And at some point, the customer gladly agreed to the complex pink and lilac, ”recalls Tatiana. 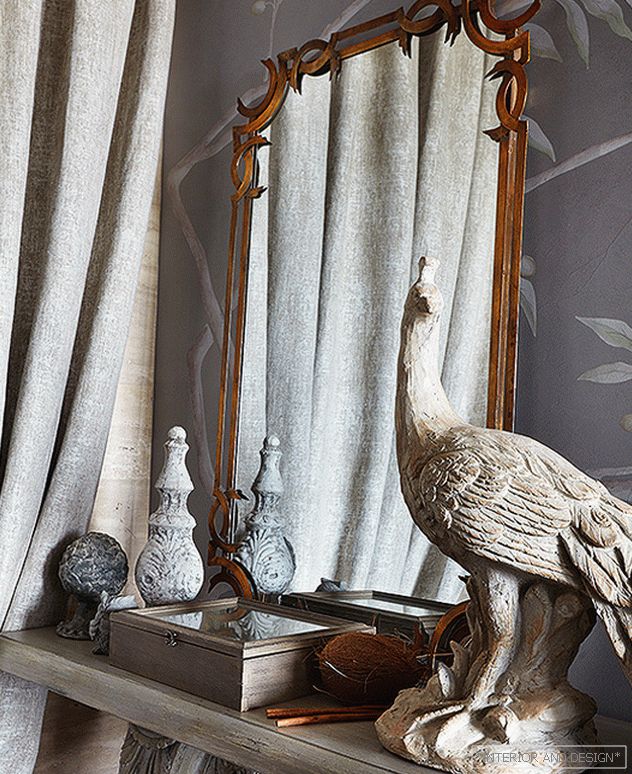 The “olive branch” decor, stencilled on the wall in the corridor, develops the theme of “germination”, so important in this project, and helps to revive the long surface. Decor items purchased in France. 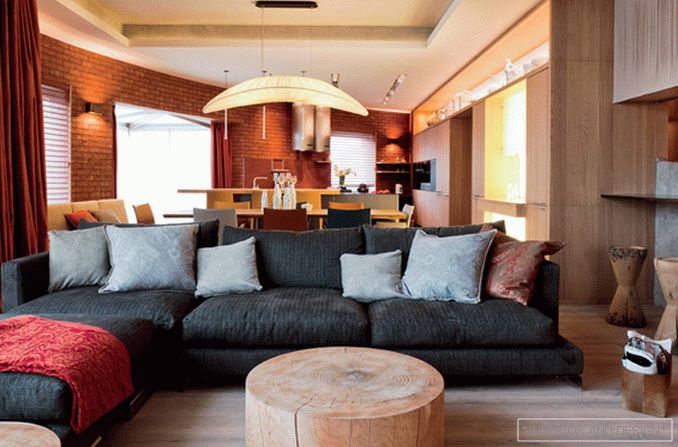 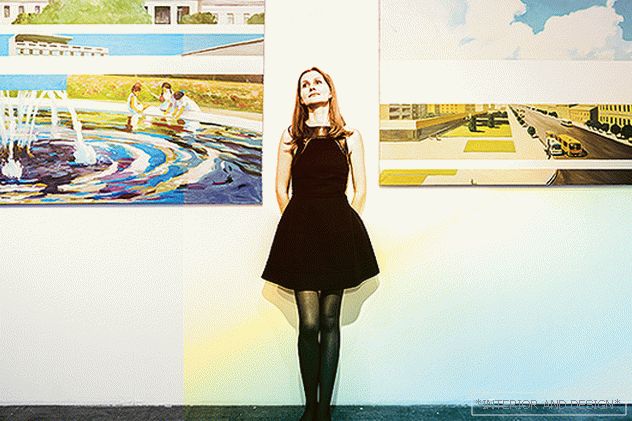 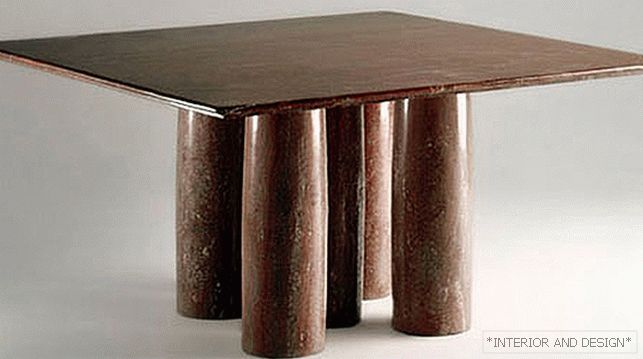 Exquisite interior for a young lady